Save Your Time, Save Your Money!

Savior Home Services provides expert electrical services for both home and business customers throughout the Spring Hill area. We’ve built our company success over the years by employing only highly trained, professional electricians to serve your electrical needs. There are plenty of electricians in Spring Hill, but we have built our reputation with customers by giving the same quality care we want in our own homes and businesses. We provide you with superior work at straightforward prices.

Choose us as your electrician whether you need a small repair or a large wiring job. We consistently provide our Spring Hill customers with:

If you want to install a new light fixture, electrical panel, or even re-wire your entire house, Savior Home Services provides a full range of electrical services. You can call us and discuss any issue with our in-house electrician who can give you a free estimate for new wiring work. Sometimes pricing repairs can be more complicated because one problem can have many causes. In that case, the electrician will come to the premises to do some troubleshooting before giving you an exact price up-front and in writing. You can trust that if it worked once, it will again when our electricians are finished. If you live in the Spring Hill area and are looking for a highly trained, professional and honest electrical contractor, we hope you will consider choosing Savior Home Services for your electrical work. No matter what the job, we seriously consider our service unrivaled by other electrical contractors in Spring Hill.

Spring Hill first appeared on Hernando County Maps in the mid-1800s along what is today Fort Dade Avenue just north of the community of Wiscon. The modern Spring Hill was founded in 1967 as a planned community, which was developed by the Deltona Corporation and the Mackle Brothers who built the community. The plans for the community are actually identical to the community of Deltona, Florida. The Mackle Brothers sold many of the properties and land in the area through intense advertising. It appeared on maps of Florida as early as 1856. It has since become a sprawling semi-city in its own right, though it is an unincorporated area. The main entrance to the original development is marked by the Spring Hill waterfall on Spring Hill Drive and U.S. Route 19 (Commercial Way). Its location has Hernando Beach to the west, Brooksville, Florida to the east, and Tampa to the south via theSuncoast Parkway, US 41, and I-75.

With its proximity to Tampa, about 35 miles (56 km) south and the completion of the Suncoast Parkway in 2001, has made Spring Hill easily accessible to the Tampa-St. Petersburg area.

Spring Hill is also home to the new 100,000-square-foot (9,300 m2) campus of Pasco–Hernando State College. This was the fourth campus built out of the five now in existence.

JCPenney opened a store on U.S. Route 19 (Commercial Way), just south of Spring Hill Drive in Spring 2008, adjacent to the store is a 250,000-square-foot (23,000 m2) shopping center that include many stores and restaurants, including: Best Buy, Cracker Barrel, Office Depot, Ross & Sports Authority. A Kohl’s on Spring Hill Drive, just east of the Suncoast Parkway opened in Fall 2008; a Target was constructed at the same location and opened in July 2009. Just a few miles south of Kohl’s and Target off of the Suncoast Parkway at County Line Road and Anderson Snow Road is a new plaza called The Shoppes of Avalon. Their anchor store is Publix which opened fall of 2009. There is also a Nail Star, China Star & Leo Liquors. The newest businesses that have opened on SR 50 are Five Guys, Texas Roadhouse, Panera Bread, HHGregg, Marina and a Burger King.

Nearby Weeki Wachee Springs is home to the famous live mermaid show and Florida’s only spring-fed water park, Buccaneer Bay.

When you need to hire a professional Electrician or AC Technician for repairs, troubleshooting, or installation please call 813-907-8877, or schedule online.

"I would recommend this company to any and everyone. Excellent costumer service, prompt and on time. Up front , honest with very fair pricing. I will definitely use their services again." - Carrie

"Had a great experience with these two gentlemen. They were very polite, experienced and prompt. Would recommend them to all of my family and friends." - Laurie

"Chad and his team are knowledgeable professionals who take the time to explain the problems and your options so that you can make an informed decision..." - Laura 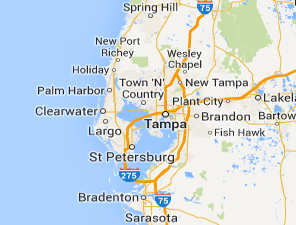